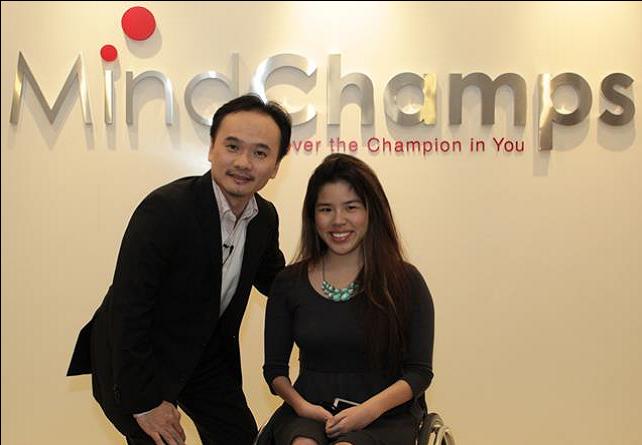 MindChamps brand ambassador and national Paralympic swimmer is currently in Rio, Brazil, representing Singapore for her third Paralympics. Yip Pin Xiu first made headlines by winning the gold medal at the women’s 50m backstroke in the 2008 Beijing Paralympics.

It was this achievement that made her Singapore’s first and only Paralympics gold medallist, a distinction that is still held by her today. Moreover, Pin Xiu is a recipient of other prestigious awards and accolades including the Meritorious Service Medal BBM in 2008 and the Junior Chamber International’s 10 Outstanding Young Persons of the World award in 2011. She was also inducted in the Singapore Women’s Hall of Fame in 2014.

At the 8th ASEAN Para Games held in Singapore in 2015, Pin Xiu achieved an outstanding sporting feat by shattering the women’s 50m backstroke (S2 Class) world Paralympic record with a time of 1min 01.61 seconds and winning the gold medal in this event. Her swim erased the previous world record time of 1 min 03.00 seconds set by China’s Feng Ya Zhu at the 2012 Paralympics held in London.

Pin Xiu’s sporting feat earned her The Straits Times Athlete of the Year for 2015, a prestigious award that recognises Singapore athletes who achieved exceptional success and, more importantly, who go on to become inspirational role models in the manner that they achieve success.

More amazingly, Pin Xiu has achieved sporting success despite her deteriorating physical condition. She has been afflicted with muscular dystrophy, a syndrome that slowly breaks down her muscles as she grows older. It was for this reason, along with her sheer determination and tenacity to do well despite her physical condition and the inspiring nature of her accomplishment, that distinguished her from other able-bodied athletes who were also nominated for the award. In fact, Pin Xiu had won seven out of 13 votes from a 13-member award judging panel and is only the second para-athlete to win the award since its inception in 2009.

Pin Xiu was also accorded The Straits Times Star of the Month (for December 2015), an award which recognises well-deserving athletes – on a monthly basis – for their sporting achievements and was a nominee of The Straits Times Singaporean of the Year for 2015, an award which recognises Singaporeans whose extraordinary acts of goodwill, ingenuity or perseverance improved their community and the lives of others during the year. Both of these achievements were a result of her achievement at the 8th ASEAN Para Games.

Importantly, Pin Xiu believes in overcoming obstacles and achieving success by adopting a Champion Mindset, which is a personal attribute that is about being the best one can be, discovering one’s strengths, recognising one’s weaknesses and turning them into strengths. She enthuses,

Earlier this year, Pin Xiu smashed another world record at the International Paralympic Committee (IPC) European Open Championships in Funchal, Portugal in May. With a time of 2 min 9.79 seconds, Pin Xiu garnered gold in the 100m backstroke (S2 class). Perseverance ensued and two days later, she broke her own record of 1 min 01.61 seconds in the women’s 50m backstroke (S2 class) with a new time of 1 min 01.39 seconds.

Poised with a Champion Mindset to be the best she can be at the 2016 Rio Paralympics to be held in early September this year, Pin Xiu may once re-write the history books with yet another story.

It is the story of a journey against all odds.