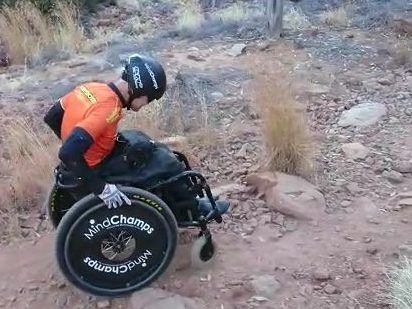 When Dr William Tan, a paralympian, multiple gold-medallist and multi-world record holder in marathons, tells you the going is tough, you better believe it!

Tougher than the Antarctica and the North Pole. Very challenging. The rocks, pebbles, stones, undulating terrain.

But the Champion mindset kept me going,

says Dr William, while on the trail.

The 60-year-old took on this challenge to raise money to support indigenous education, health, research and community initiatives organised by the University of Newcastle Australia where he is an alumnus.

Want to help? Donate to his cause here.

He is also the first wheelchair user ever to be allowed on the trail, which is regarded as scared land by the indigenous community.

On Day 2, Dr William had to overcome dry, salty, sandy riverbeds to reach the Glen Helen Gorge.
He then headed to a section of the Larapinta track called Rocky Bar Gap, one of the final sections of the Trail. He overcame many difficult terrain types along the Rocky Gap trail to Mount Sonder and pushed the boundaries of what could be done in a wheelchair.

The narrow, rocky trail proved very difficult but Dr William powered on through the terrain, over many rocks, through riverbeds and spinifex.

At the end of the day, Dr William had two flat tyres caused by spinifex needles, which he proceeded to repair in his tent at night.

Before he left, Dr William said that this will be the most treacherous trail that he has ever embarked on.
In his usual candor, Dr William remains positive that he will complete the course. He laughs as he told us, “There’s a saying, ‘When there’s a will, there’s a way’, and my name is Will.”

On a positive note, Dr William has not encountered any wildlife yet, as Larapinta Trail is home to Australia’s most poisonous snakes, dingos and insects.

There are a few more days to go, and we wish Dr William all the best in completing this challenge.

Get to know Dr William Tan

Dr William Tan is the resident doctor at MindChamps Medical @ OneKM. A multi-degree graduate of the National University of Singapore, as well as Newcastle, Auckland, Harvard and Oxford Universities,

Dr Tan is a highly-successful neuroscientist and medical doctor who has worked at renowned medical and research institutions, including the National Cancer Centre in Singapore.

An accomplished sportsman who devotes his time to championing and fundraising for needy causes worldwide, Dr Tan has raised over $18 million for children’s and medical charities, to date.