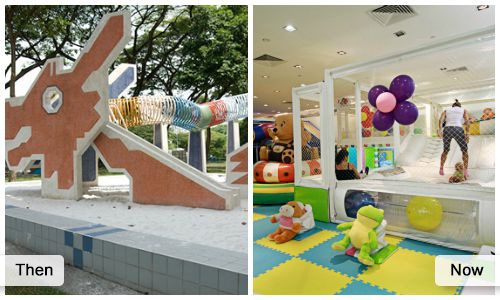 Have you ever wondered how different our lives are today, compared to when we were growing up as kids?

While we have many things to be thankful for in the world we live in today – modern homes to live in and educational games that help kids learn better, among others – sometimes, it may not be such a bad idea to take a break from the buzz and complexities to enjoy the simple pleasures of the good old days.

With that in mind, we’ve made a list of how different things used to be now and back when our parents were in charge:

Some of us grew up living in kampong homes with the most basic amenities while the rest of us were among the first ones to enjoy living in HDB flats when it was first launched to provide better homes for Singaporeans. Today, our children have the privilege to come home to the comforts modern living – be it in a HDB flat, condominium or a landed home.

Growing up as a child, most of us remember spending our free time playing outdoors with our neighbours. Games such as Five Stones, Marbles and Chapteh were our all-time favourites, and we’d make up our own games along the way. These days, our children grow up with a slew of educational games and apps right from the moment they learn to sit up. It might be a good idea to introduce some of these “old school” games to put a fresh spin to play time.

3. Playgrounds with a Difference

As playing outdoors was a way of life for kids of our time, sandbox playgrounds were built at various neighbourhoods in Singapore. Although some of these “old-school” playgrounds still exist at quiet corners of old estates, there are now plastic playgrounds with rubber mats at all housing estates which are deemed to be safer for kids to play in.

Parents also have the choice to take their kids to indoor playgrounds which are located in the comforts of air-conditioned malls. This option is hugely popular with those who are not too keen on outdoor play due to health and hygiene reasons.

4. The Phones We Use

Back then, most of us communicated and keep in touch with family and friends via home phones powered by the Singapore Telephone Board, although most conversations were typically done face-to-face. It was only much later in the 90s that mobile phones came into the picture, and even then, these were much simpler than the array of smartphones that we have today. As a result, relationships and the bonds we form were a lot stronger, especially among parents and their kids as there were no text messages or email distractions when the kids were at home.

5. The Joys of Cartoons

Cartoons either came in black-and-white versions or simple animated illustrations in full colour. As kids growing up, we look forward to watching cartoons on TV every weekend. These days, the cartoons our kids watch come in 3D, high definition and bursting with bright colours – there are also dedicated channels that air these cartoons all-day long. On top of all that, we also enjoy the convenience of recording our kids’ favourite shows for them to watch later on.

6. How We Get the Latest News Updates

Here’s how most families start their day in the morning: Parents will sit down with their kids for breakfast with a cup of coffee or tea on one hand while going through the newspaper with the other. Today, the novelty of leafing through the daily newspaper has been replaced with smartphones and tablets, as this is how parents catch up on the latest news and happenings around the world.

There were many types of snacks that kids of our time got to enjoy, ranging from the colourful ice balls and Ding Ding Candy to haw flakes and ice pops. As our lifestyles evolved over the years, these sweet and colourful treats of the past have since been replaced with potato chips, wafer sticks, cupcakes and popsicles that come in almost every imaginable flavour!

Back in the day, kids who misbehaved were spanked by their parents to set them on the path to good behaviour.

Yes, tough love was the way to go during our time, and all forms of disrespect and misbehaviour were frowned upon. This was a stark difference to the positive discipline methods of reasoning and displays of love and affection that parents are leaning towards today. In fact, it is widely believed that the ways in which we have been brought up in the past no longer work on today’s generation, as we focus on raising confident, competent kids.

In the past, when our parents needed tips and answers on raising kids, they turned to close family and friends, and best-selling parenting books. This is quite different to the way we look for answers and advice now. With millions of parenting websites and blogs available online, it is here that we turn to for research and information. It is also not uncommon for us to form support groups with fellow parents on social media and online forums.

When we were kids, most of us had grandparents who stayed with us. While mum and dad worked during the day, grandma and grandpa would look after the kids and spend time going on excursions or telling them stories of the past. Thanks to great family support, there was no rush for preschool or childcare enrolment.

These days, it is not uncommon for mums and dads to rush in registering their newborn (or in some cases, their unborn child) in the hopes that they will secure a place in the preschool of their choice as early as a year later. Enrichment and “Mummy and Me” classes for infants and toddlers are also gaining popularity as parents realise the importance of giving their kids an early head start in learning and development.

In what other ways has parenting changed since your childhood days? Share with us in the comments section below.

Read also: Education in the 21st Century: The Challenge