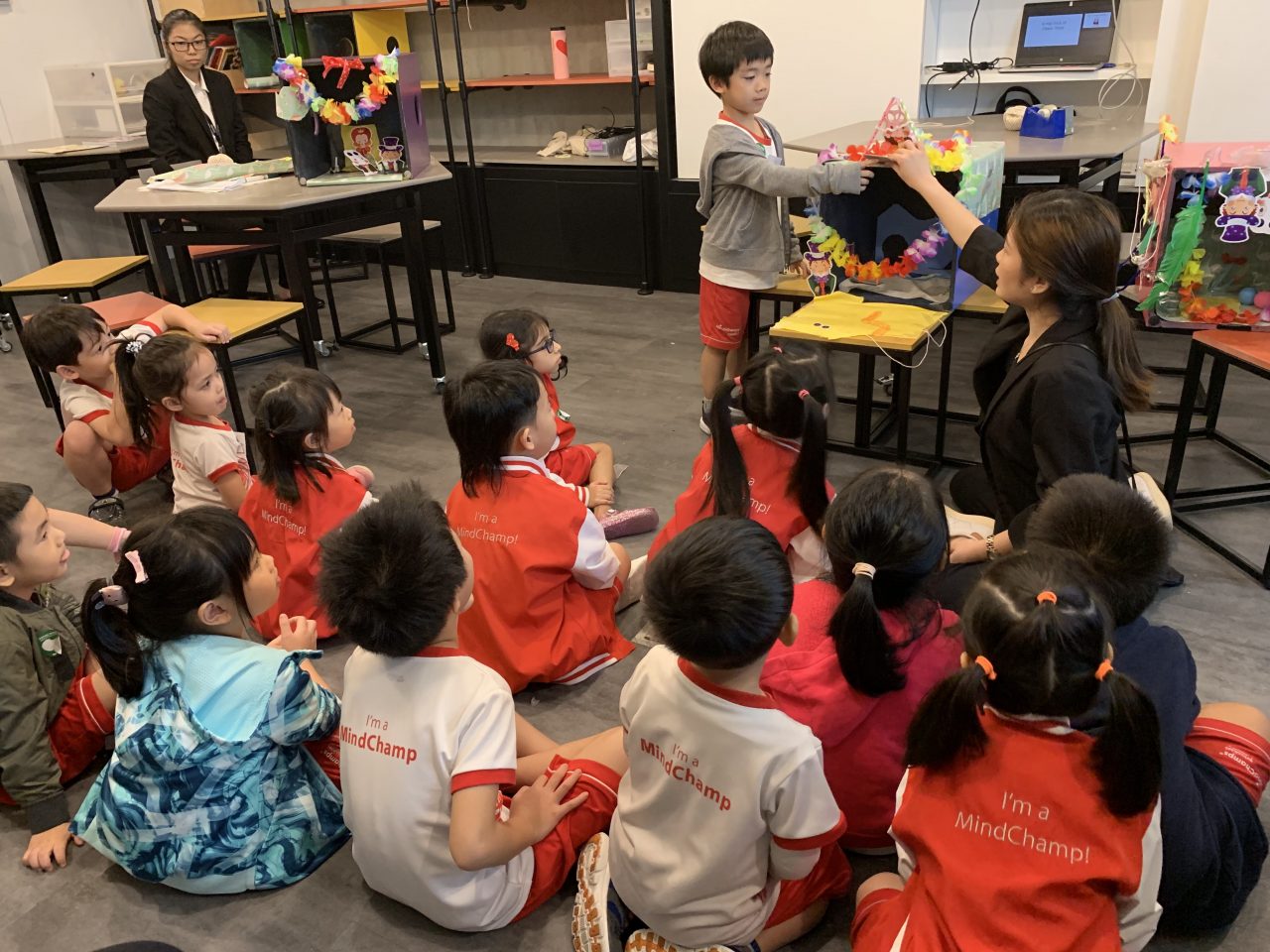 Creativity is the act of turning imagination into reality and is an essential life skill as it helps children in various aspects of their development. Children who are creative develop cognitive skills, problem-solving skills and most importantly, learn self-expression.

Creativity is often thought of as a trait that you are born with. However, a combination of environment, genetics and personality traits play a role as well.

Creativity can be nurtured and we will see how this kindergarten in Singapore does so.

To narrow down the focus of the learning subject ‘Continents and countries in the world’, the K1 children of this kindergarten in Singapore explored ‘Places in Singapore’. Upon a group discussion on places of interest they have visited, the children were introduced to the book Sasha visits Singapore by author Shamini Flint. This book made the children recall their field trips to the Art Science Museum and SEA Aquarium.

Building on the theme, the children sang the song “Singapore Town” and took on the role of choreographing a dance to accompany the song. When brainstorming suitable actions that matched the lyrics, a child suggested that they roll their hands up and down for the part with the bus. They learnt how to be creative in adapting the actions to fit the length of the song and eventually performed the song with confidence in class.

Read also: Here’s What Your Kindergartener Gets Up to at MindChamps @ West Coast Plaza

The children in the K1 class chose a place of interest in Singapore to paint. The teachers encouraged their students to take time to explore the materials given and pursue their ideas.

In coming up with their ideas, the children tapped on sources such as books, outdoor field trip experiences, songs and various artists. The free rein on materials and planning encouraged the children to be self-directed. Eventually, they transformed their plain canvases into beautiful art pieces. Once done, the children presented their artwork to their classmates.

Creating a Parachute and Puppet Theatre

The K1 and K2 children attended a workshop held at the Art Science Museum called ‘A Hat Trick of Clever Tricks’. After listening to a story, the children created their own wonderland finger puppets and devised a suitable parachute to help the rabbit in the story to land safely.

The children worked together in teams to make creative use of the materials provided to form their parachute. Through this process, they learnt physics through play – specifically, about gravity and how the area, texture and weight of the parachute affect the speed of the fall when their classmates released the parachutes.

Lastly, they showcased their creativity in arts by creating their own puppet theatre. Using the puppets they created, they did a role play which encouraged them to think out of the box. They created storylines, tone of voice, expressions and interesting ideas in their story.

Indeed, creativity can be developed by giving children the autonomy to decide on the methods and materials used to present their ideas. Every child is capable of creating something uniquely theirs, and this precious trait of self-expression is carefully nurtured by the teachers at MindChamps PreSchool @ West Coast Plaza.

Nurture your child’s creativity with MindChamps PreSchool @ West Coast Plaza and bring out the best in his/her potential during the kindergarten years.