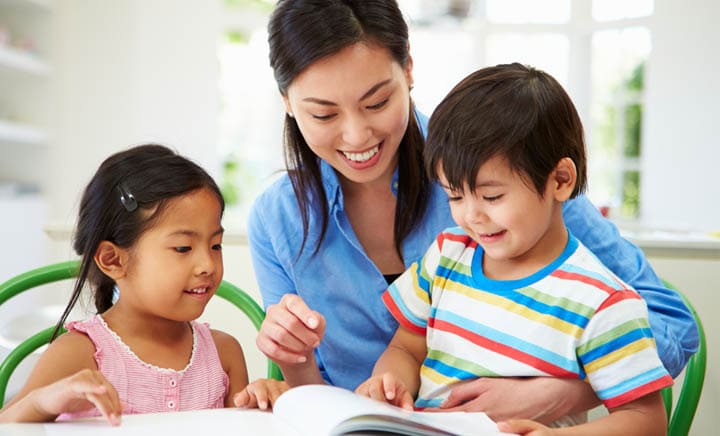 Due to the multi-racial society in Singapore, many young children are bilingual and learn at least one other language in addition to English in school. Children of Chinese descent are required to take Chinese as their Mother Tongue language if they are studying in local mainstream schools. As such, it is essential that a strong foundation is built in their early years.

Studies have shown that young children are able to learn two or more languages effectively without confusion. In Singapore, the Chinese language is predominantly offered in preschools as a second language.

At home, parents adopt their own approach of reinforcing Chinese into their children’s life. For example, the One Person, One Language (OPOL) strategy is where each parent uses either Chinese or English exclusively with their child to ensure equal exposure to both languages.

Another strategy is known as Minority Language at Home ([email protected]), where both parents use only Chinese at home as the child will pick up English from outside the home. The last strategy is the Mixed Language Policy (MLP), where the main language that the child has a higher understanding of, is used to discuss broader and in-depth topics, and the minority language is used for everyday chatter.

Read also: Raising Bilingual Kids: Reasons to Encourage and Inculcate the Use of Mother Tongue

Why kids are resistant towards learning Chinese

Despite the efforts of parents, there are just some children who refuse to use Chinese. This could happen because children know that you are more conversant in English and tune out whenever Chinese is used. As such, they are more inclined to use the language that they are most comfortable with, which is English.

All these can be linked to a lack of need and exposure. As English is the primary language used in Singapore, there may not be a motivation for children to use Chinese actively in their daily lives.

There are a few methods to spark interest during the crucial learning period before primary school, and this includes sending your child to a Chinese immersion preschool or Mandarin playgroup.

Read also: How Mandarin for Toddlers Can Be Taught by Non-Mandarin Speaking Parents in Singapore

A Chinese immersion preschool or Mandarin playgroup such as MindChamps Chinese PreSchool can play a part in building up your child’s interest in the Chinese culture, giving them more confidence to utilise the language freely.

Being a Chinese immersion preschool, MindChamps Chinese PreSchool provides exposure to both Chinese and English. Instead of scheduled Chinese lessons, there is a specialised Chinese curriculum where selected lessons are conducted in Chinese. It is also the language of instruction between teachers and children. As a result, this creates a greater need and interest in using the language.

The focus will be on exposing your child to the Chinese culture to help them establish a sense of identity and self, which naturally results in a heightened interest in the language. Children enrolled in the Mandarin playgroup are introduced to essential elements of Chinese culture which includes traditional Chinese art such as painting and calligraphy, literature and history, as well as stories with morals to build character values.

Your child will be instilled with positive character values such as self-reflection, compassion and integrity. Surrounded by peers and teachers who use Chinese on a daily basis, your child is sure to master Chinese through an enjoyable learning journey!

Find out how MindChamps Chinese PreSchool can help to cultivate a lifelong interest in the Chinese language and culture in your child.