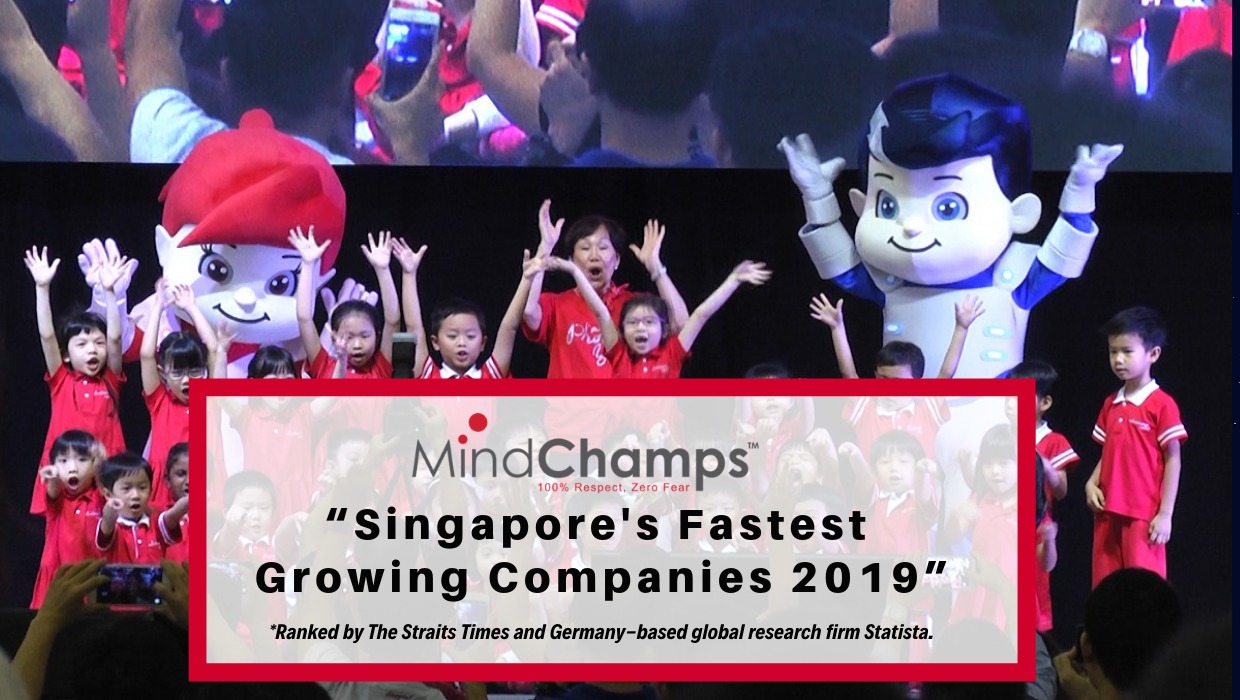 In the competitive business world today, one of the key factors that lead to a company’s growth and expansion lies in its drive to pursue innovation.

To celebrate this innovative spirit among firms in Singapore, The Straits Times, together with Germany-based global research firm Statista, conducted a study to uncover the fastest growing companies in Singapore, in 2019. A variety of companies from wide-ranging industries made it onto the list of 85 companies that demonstrated revenue growth from 2014 to 2017.

MindChamps PreSchool Ltd (MindChamps) has been ranked top 50 among Singapore’s fastest growing companies, and is the only preschool in Singapore to be included in the list. MindChamps’ strong financial growth in 2018, as well as the journey that took the organisation from point zero in 2008 to the number one brand position in the highly-competitive Singapore premium preschool space and its successful listing on the mainboard of the Singapore Exchange in 2017, is further testimony of this well-deserved ranking.

As shared by Mr David Chiem, Founder CEO and Executive Chairman of MindChamps, the strong performance of MindChamps throughout 2018 is the result of 20 years of solid research and implementation – which underpins its cutting-edge programmes for both their young Champs and teachers.

He further explained that this is only the beginning, and that there are greater things that lie ahead for MindChamps: “In line with our culture of ‘staying ahead of the curve’, for the past 8 years, we have been preparing for the launch of MindChamps Version 2.0, which will be revealed to the world this year,” he affirmed.

Singapore’s Fastest Growing Companies: How were they determined?

The ‘Singapore’s Fastest Growing Companies’ survey is jointly conducted by The Straits Times and Statista, an international market research firm based in Hamburg, Germany, that has provided business intelligence and research on more than 80,000 topics. Statista has a solid track record in conducting similar corporate rankings on an international level, in countries such as Britain, France, Switzerland and Germany.

The Straits Times editor Warren Fernandez noted: “In a fast-changing economy, companies which are growing rapidly have a special cache as everyone wants a piece of the action.

“We wanted to identify these players and showcase how they were moving ahead. We are happy to work with our partners, Statista, on this project, given their good track record on data analytics projects of this sort with other leading media brands internationally.”

To be considered for listing, companies had to meet certain criteria, such as having achieved revenue of at least $150,000 in 2014 and at least $1.5 million in 2017, excluding any investment or funds injection.

Dr Thomas Clark, associate partner at Statista who heads the company’s corporate development and international affairs, said that the objective of the study was to reveal firms which were considered to be “accelerators of the economy”. As a whole, he explained that the list helps to find out how vibrant some of these growth champions are and what business models they have put in place.

Check out these posts for more news on MindChamps:

The Value of Consistency – 6th Consecutive Superbrands Award for MindChamps